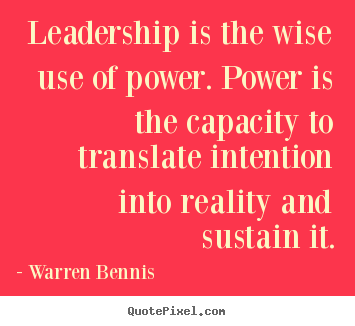 Are all leaders necessarily powerful?

When we talk about power in the context of leadership (DuBrin, 2013, p.4), we can borrow Foucault’s idea of relationship. Those, who possess power, have also the ability to shape his followers’ behaviour with threat of violence, financial leash, and authority in the social context and politics (Alsobaie, 2015, p.155). Foucault believed that power cannot exist without freedom, while according to Max Weber, another defines power as “the actual enactment of violence and/or the violation of a person’s physical space.” (ibid). Power can be distinguished as soft power, the ability to exercise influence and obtain outcomes with charisma and persuasion, and harsh power, where outcomes are obtained through coercion and financial rewarding (Nye, 2013). Russell once said that Power is a fundamental concept in social science as it is Energy in physics (Mittal and Elias, 2015).

DuBrin (2013, p.3) proposed different Leadership definitions, but common denominator is individual influence over a group of individuals to accomplish common goals. Bal, Campbell, Steed and Meddings (2008, p.8) did an interesting research on power and leadership, concluding that leaders at all levels of organization has access to power, and is not only hierarchical attribute. There are seven bases of power: The power of position, offering a leader a formal authority through position in organisation; the power of charisma, which derives from a leadership style; the power of relationships, deriving from formal and informal networks; the power of information which is generated control through the use of evidence in an argument; power of expertise, which comes from development and communication of the special knowledge; power of punishment, as ability to use sanctions on individuals for failure; and the power of reward, which is ability to recognise and reward success (ibid). In contrast, DuBrin (2013, p.211-216) also differentiate power in seven types: personal power, position power, power stemming from ownership, power stemming from dependencies, power derived from capitalising on opportunity, power stemming from managing critical problems, power stemming from being close to power, and self-serving behaviour. A leader needs power to exercise influence (DuBrin, 2013, p.211, Paschen and Dihsmaier, p.6). 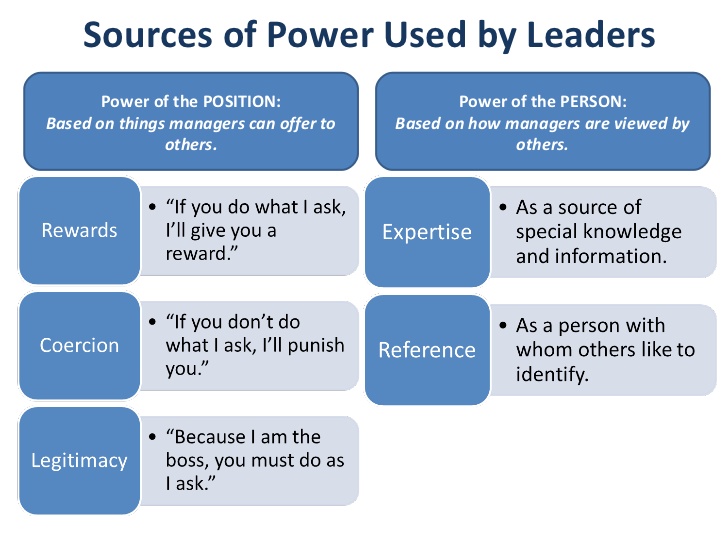 But with power comes responsibility. DuBrin (2013. p.216) discuss a variable of leadership named moral identity, proposing that leaders who possess strong moral identity are less like to misuse their power. Another attribute of powerful leader is self-regulation, defined as “the capacity for altering one’s responses to make them consistent with social values and one’s long-term goals”( Ent, Baumeister, and Vonasch, 2012, p.620). As leaders have limited physical energy it would be misleading to believe, that power is something bad (my introduction), but it is an essential component of leadership. Meng, He, and Luo (2014, p.63) suggests that main reasons for the use of power are to gain followers’ compliance and to manage the satisfaction of supervision. Powerful leaders need powerful followers. Passive followers are dependent and uncritical, while on the other hand proactive follower are those, who don’t just strictly obey a leader, but they contribute with independent thinking and contributing to the outcomes (Lapierre, 2014, p.160). Powerful leaders empower their followers, and through the shared and distributed leadership create circumstances to accomplish more (DuBrin, 2013, p.216)

There is no doubt that leaders need power to be effective. The basic idea of influencing environment requires power. We can only discuss the way this power is exercised. Therefore different situations require different leadership styles, requiring different use of power.